Enter The Drawing For A Free Audiobook

Win A Free Unabridged Copy of one of these new audiobooks:
1. My Hollywood MisAdventures
2. A Daughter Of Liberty
3. Sten And The Star Wanderers
4. MacGregor: Dying Good
5. Tales Of The Blue Meanie
6. A Cop's Life
7. The Sten Cookbook
8. The Blacksmith's Daughter
9. The Alex Kilgour Joke Book
10. The Spymaster's Daughter
11. The Hate Parallax
12. The Wars Of The Shannons

Put your name and email address in the form to the right.
Put the title of the audio you want to win in the "message" box.
Then just click "Send" and your name will be entered into the drawing.
(If your name is drawn you will be notified by e-mail.) 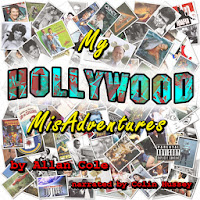 MY HOLLYWOOD MISADVENTURES: Tales sometimes tall, but always true, of Allan Cole's years in Hollywood with his late partner, Chris Bunch. How a naked lady almost became our first agent. How we survived Galactica 1980 with only the loss of half our brain cells. How Bunch & Cole became the ultimate fix-it boys. How an alleged Mafia don was very, very good to us. How to kill a "difficult" actor. Why they don't make million dollars movies. And many more.  Narrated by Colin Hussey. To get the audiobook click on the title link below. (also available at iTunes.)
My Hollywood MisAdventures
***** 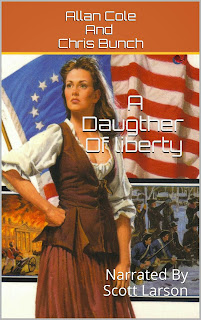 A DAUGHTER OF LIBERTY: The year is 1778 and the Revolutionary War has young America trapped in the crossfire of hatred and fear. Diana, an indentured servant escapes her abusive master with the help of Emmett Shannon, a deserter from the desperate army at Valley Forge. They fall in love and marry, but their happiness is shattered and Diana Shannon must learn to survive on her own. From that moment on she will become a true woman of her times, blazing a path from lawless lands in the grips of the Revolution, to plague-stricken Philadelphia, to the burning of Washington in the War of 1812. Narrated by Scott Larson. To get the audiobook click on the title link below. (Also available at iTunes.) 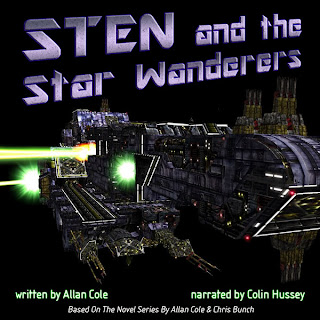 STEN AND THE STAR WANDERERS: A new short story based on the classic science fiction series by Allan Cole & Chris Bunch. Fresh from their mission to pacify the Wolf Worlds, Sten and his Mantis Team encounter a mysterious ship that has been lost among the stars for thousands of years. At first, everyone aboard appears to be long dead. Then a strange Being beckons, pleading for help. More disturbing: the presence of AM2, a strategically vital fuel tightly controlled by their boss - The Eternal Emperor. They are ordered to retrieve the remaining AM2 "at all costs." But once Sten and his heavy worlder sidekick, Alex Kilgour, board the ship they must dare an out of control defense system that attacks without warning as they move through dark warrens filled with unimaginable horrors. When they reach their goal they find that in the midst of all that death are the "seeds" of a lost civilization. Narrated by Colin Hussey. Click on the title link below to get the book. (Also available on iTunes.)
Sten And The Star Wanderers
***** 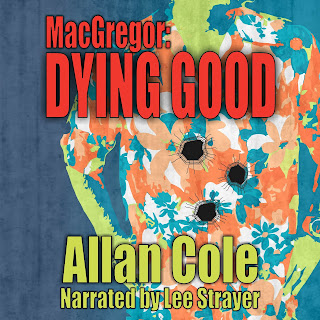 MAGREGOR: DYING GOOD - 50 kids are about to die... Mac thought he’d seen every human evil. A former Company man, he’d witnessed mass murder and systematic torture. And he’d meted out justice to the perpetrators whenever he had the chance. But now that he was living the idyllic life of a Boca Raton beach bum, he figured that was all behind him. Then his housekeeper’s granddaughter was kidnapped and Mac was plunged into a conspiracy born from the hells, involving an exiled Central American dictator, the Company, and fifty innocent children. By the time he finds out it’s almost too late and Mac must become a one-man army to save the day. Narrated by Lee Strayer. To get the audiobook click on the title link below. (Also available at iTunes.) 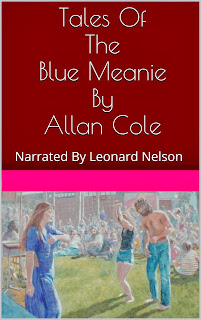 TALES OF THE BLUE MEANIE: In the depths of the Sixties and The Days Of Rage, a young newsman, accompanied by his pregnant wife and orphaned teenage brother, creates a Paradise of sorts in a sprawling Venice Beach community of apartments, populated by students, artists, budding scientists and engineers lifeguards, poets, bikers with a few junkies thrown in for good measure. The inhabitants come to call the place “Pepperland,” after the Beatles movie, “Yellow Submarine.” Threatening this paradise is‘The Blue Meanie, a crazy giant of a man so frightening that he eventually even scares himself. Narrated by Leonard Nelson. Click the title link below to get the audiobook. (Also available on iTunes) 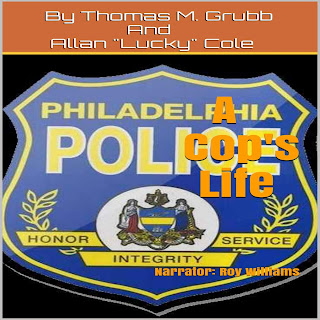 A COP'S LIFE... Christmas, 1953: While the rest of Philadelphia sings Jingle Bells, Thomas Grubb gets his first taste of a cop's life. Before he cashes his first paycheck he encounters: a man gutted by a knife-wielding mugger, a fighting-mad mental case intent on destroying a hospital emergency room and the hushed-up shooting death of an undercover cop. That first week is nothing compared to what lies ahead. Working as a street cop, an undercover officer, a detective and finally in gang control, Grubb will spend the next thirty years going toe-to-toe with all the fast-changing and sometimes violent events that have rocked American society. A Cop's Life: The remarkable story of a truly remarkable man. Narrated by Roy Wells. To get the book click on the Title Link below. (Also available at iTunes) 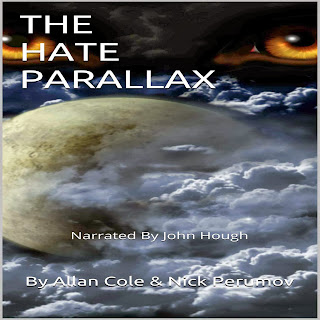 THE HATE PARALLAX: What if the Cold War never ended -- but continued for a thousand years? Best-selling authors Allan Cole (an American) and Nick Perumov (a Russian) spin a mesmerizing "what if?" tale set a thousand years in the future, as an American and a Russian super-soldier -- together with a beautiful American detective working for the United Worlds Police -- must combine forces to defeat a secret cabal ... and prevent a galactic disaster! This is the first - and only - collaboration between American and Russian novelists. Narrated by John Hough. Click the title link below to get the audiobook. (Also available at iTunes.) 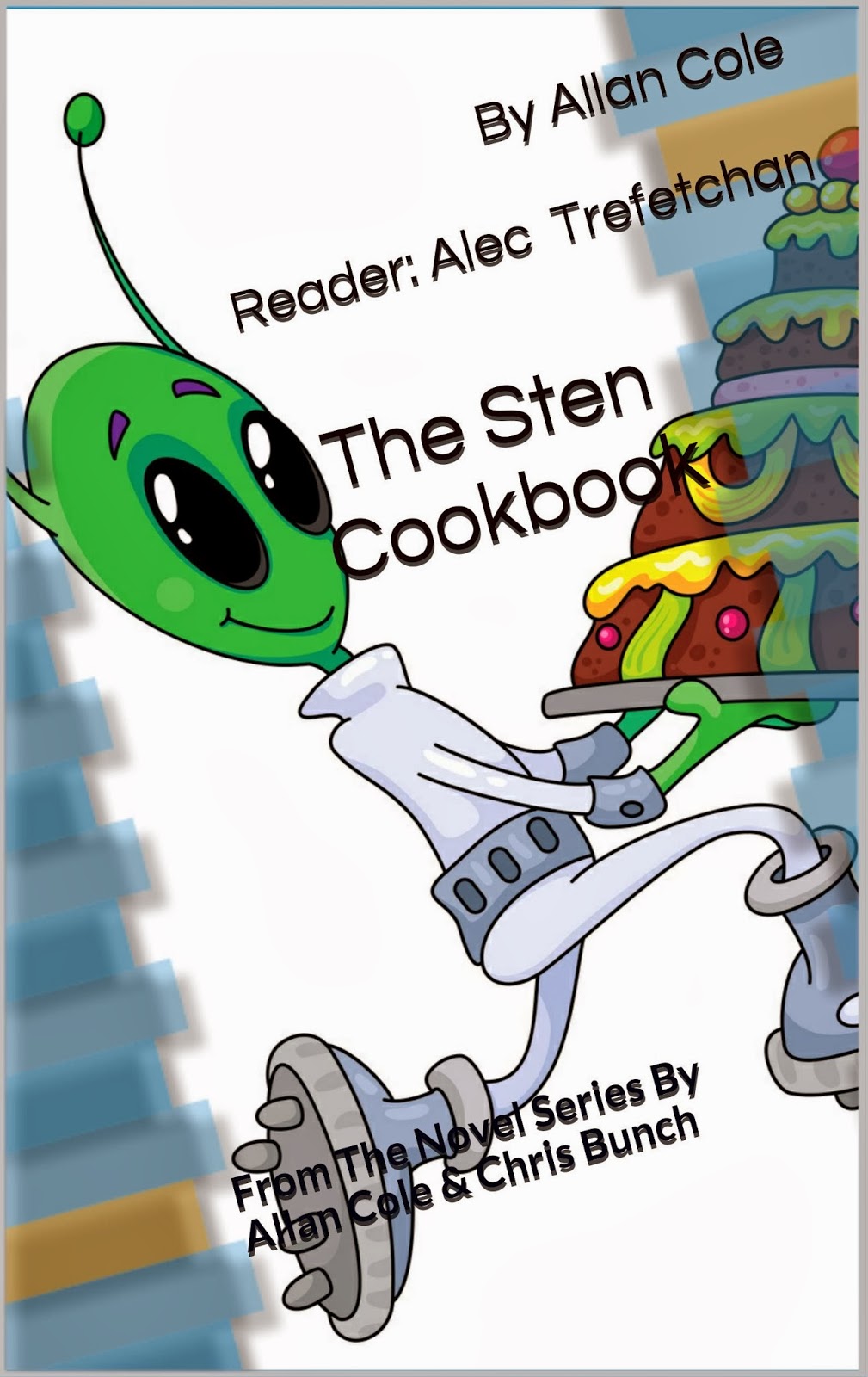 THE STEN COOKBOOK: Sten's boss - The Eternal Emperor - is back and he's ready to reveal his most precious secrets! No, not the secret of AM2, you silly clots. There are more important things than the Galaxy's ultimate energy source. We're talking food, folks. A cookbook filled with mouth watering set- your-head-on-fire recipes the Emperor has been hoarding for thousands of years. Dishes like: Nuked Hen and Asparagus Normandy and Son Of A Scrote Soufflé. He's even got the recipe for that fiery Bhor booze  - Stregg. And, never fear, the Emperor's hangover cure is here in the form of Angelo Stew. Read. Cook. Eat. And enjoy! Narrated by Alec Trefetchan.
THE STEN COOKBOOK
***** 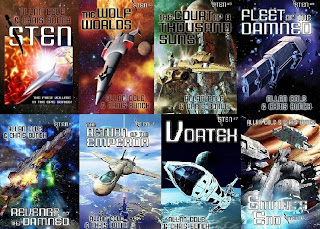 THE STEN SERIES: Hailed as a “landmark science fiction series” the Sten Series - by Allan Cole and the late Chris Bunch - has thrilled millions of readers all over the world. Set three thousand years in the future, the eight Sten novels tell the tale of a tough, street-wise orphan who escapes his fate as factory planet “delinq” to become the strong right-hand of the most powerful man in the Universe – a man hailed by his billons of subjects as “The Eternal Emperor.” 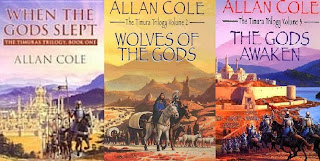 FANTASY CLASSICS: "Let The Timura Trilogy sweep you away with a tales of such power and passion that you will forget every other fantasy you've ever read. Like the masters who have come before him, Allan Cole has created a haunting and unique world peopled with characters you will hate to love and love to hate...a unique world whose siren song will be irresistible to fantasy lovers everywhere..." - Shelly Shapiro, Executive Editor, Del Rey Books... "Brilliantly inventive heroic fantasy on the grandest scale."Nick Austin, Senior Editor at Hodder-Stoughton, in England... Sky Nonhoff, Senior Editor at Bertelsmann Publishing in German said: "Allan Cole opens a new chapter in the history of fantasy novels. Like life itself, this novel is inventive, poetic, hilarious and tragic, and it echoes with the thunder of great adventure. Allan Cole is a wonderful writer... Read these novels, and get down on your knees." Narrated by John Hough. Click the title links below to get the audiobooks. (Also available on iTunes)

When The Gods Slept
Wolves Of The Gods
The Gods Awaken
***** 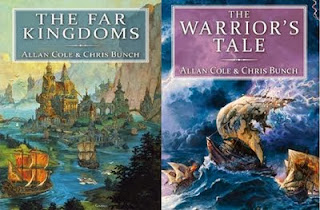 THE FAR KINGDOMS SERIES
(World Fantasy Finalist)
"Allan Cole and Chris Bunch - bestselling authors of the Sten series - now turn their storytelling talents from science fiction to epic fantasy--with a magnificent quest novel. The Far Kingdoms: a place of wonders, riches, magic, and terrors... a place where a young trader will seek wealth beyond imagination and find the adventure of a lifetime." - Publishers Weekly. 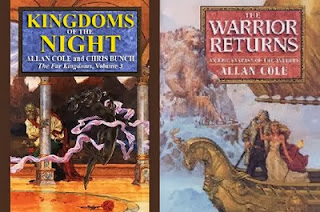 The four books that make up The Far Kingdoms Series follow Almaric Antero and his warrior sister, Rali, on desperate journeys to lands no one from their world have ever seen before. And in the end, a shattering magical truth is revealed.
Click the title links below to get the audiobooks. Narrated by John Hough and Kris Faulkner. (Also available on iTunes) 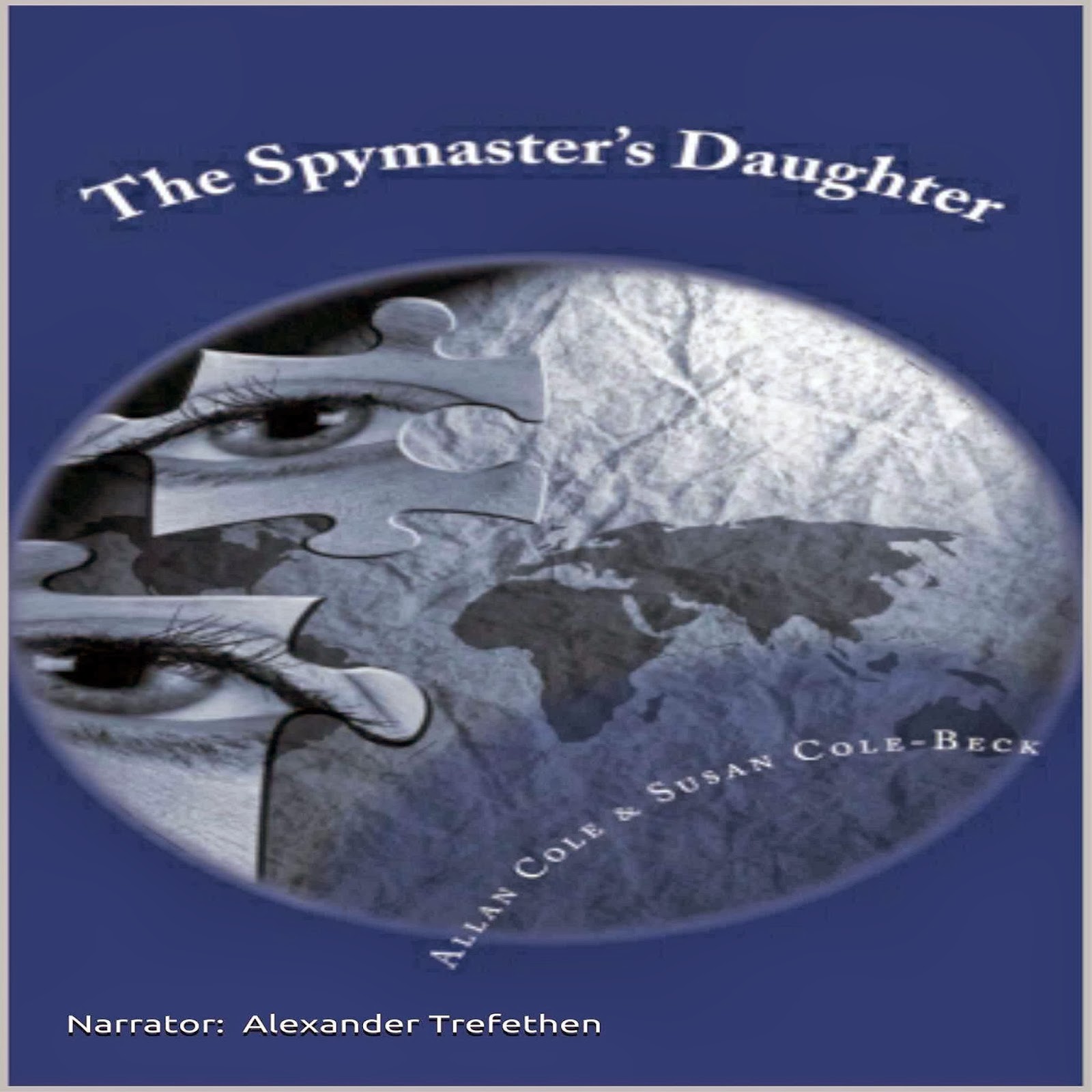 The Spymaster's Daughter: After laboring as a Doctors Without Borders physician in the teeming refugee camps and minefields of South Asia, Dr. Ann Donovan thought she'd seen Hell as close up as you can get. And as a fifth generation CIA brat, she thought she knew all there was to know about corruption and betrayal. But then her father - a legendary spymaster - shows up, with a ten-year-old boy in tow. A brother she never knew existed. Then in a few violent hours, her whole world is shattered, her father killed and she and her kid brother are one the run with hell hounds on their heels. They finally corner her in a clinic in Hawaii and then all the lies and treachery are revealed on one terrible, bloody storm ravaged night. 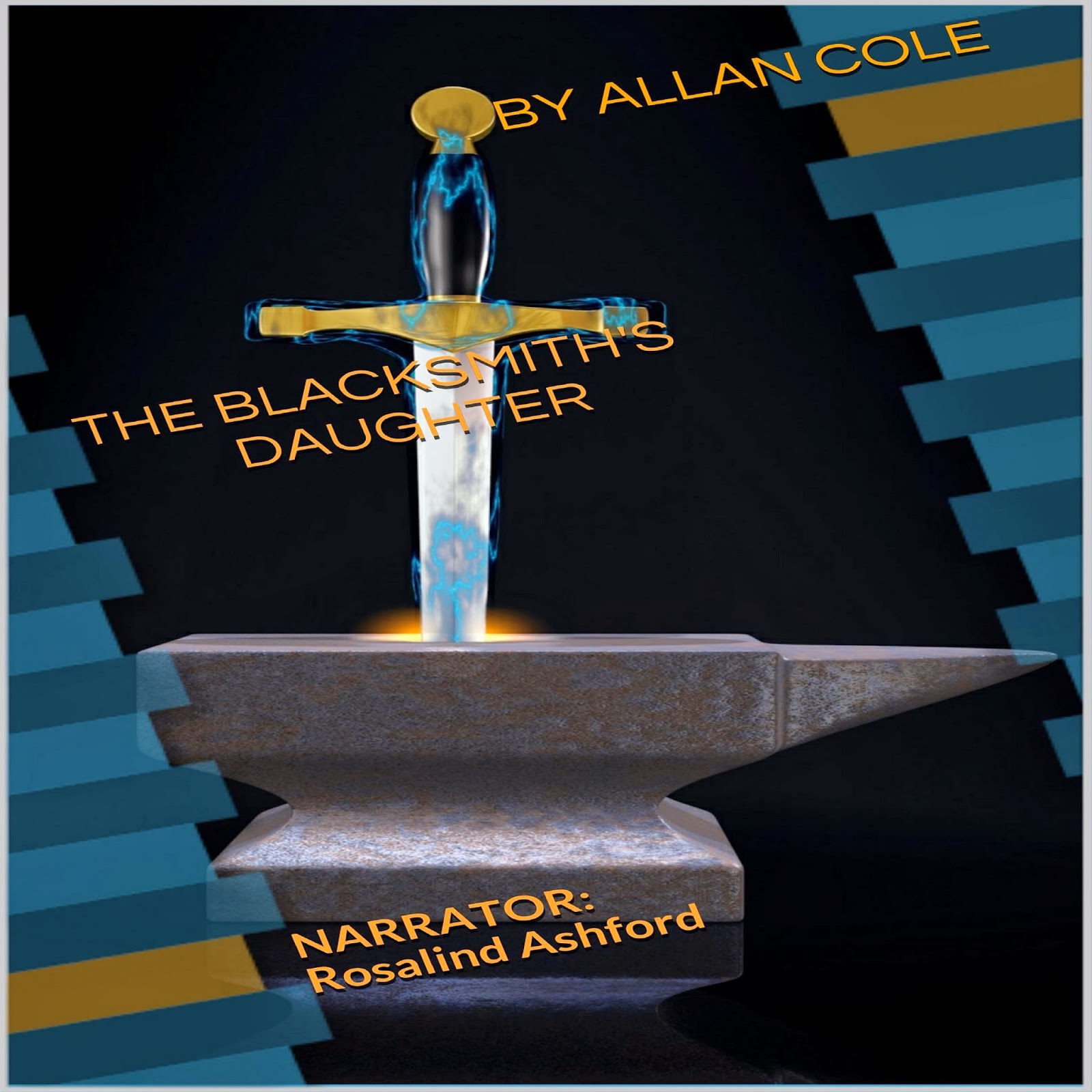 Through hope and magic an abused girl creates a wondrous sword that will someday be wielded by a mighty king. Narrated by Rosalind Ashford 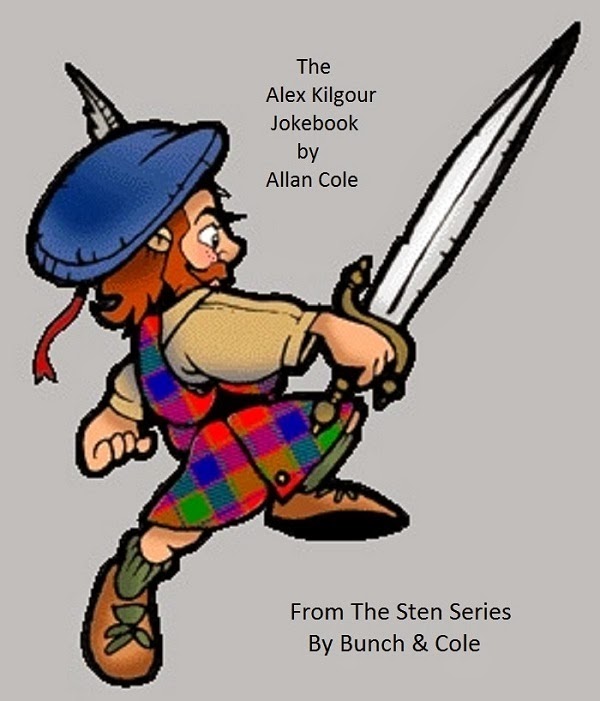 
THE WARS OF THE SHANNONS 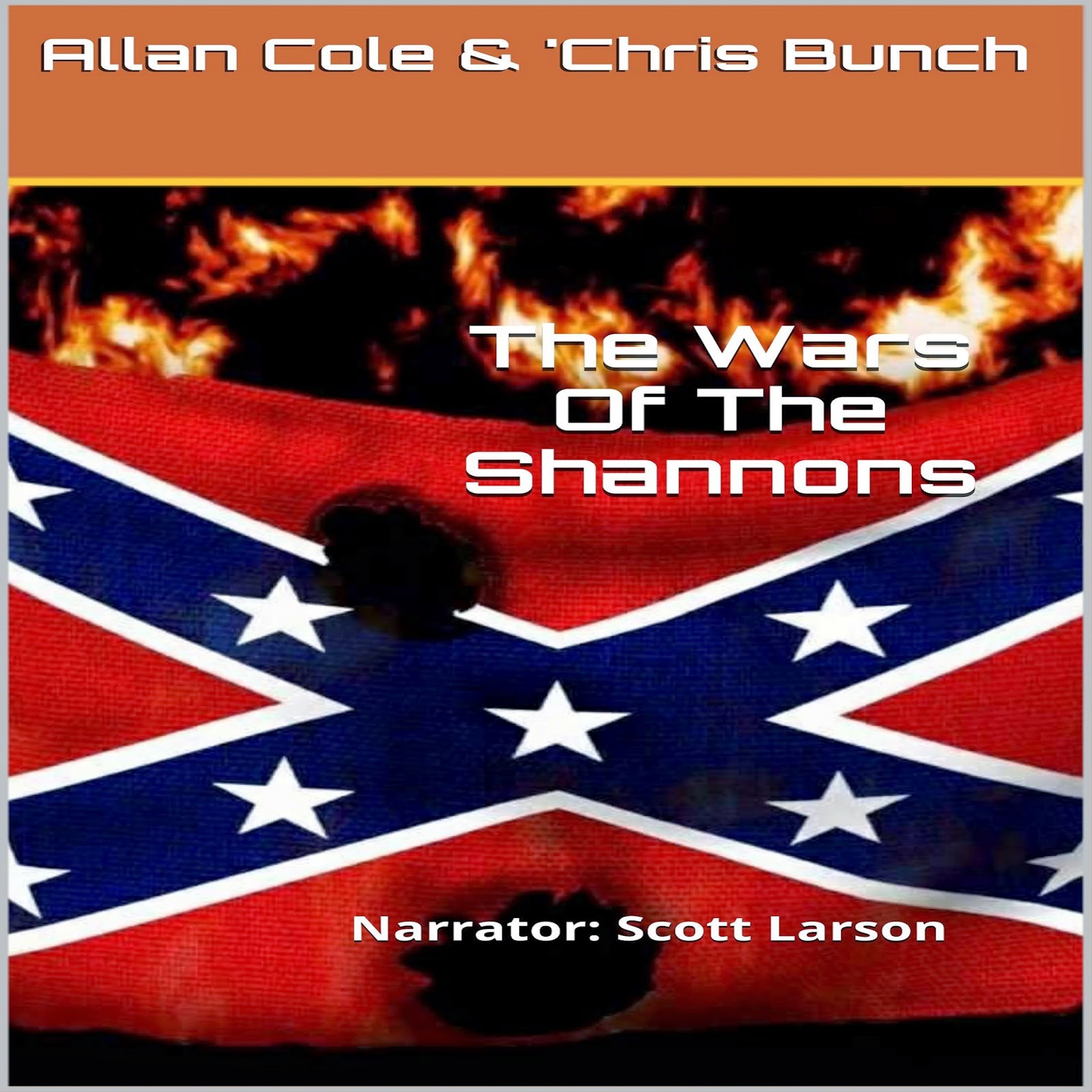 THE WARS OF THE SHANNONS: in the sequel to A Daughter Of Liberty, young Patrick Shannon is the heir-apparent to the Shannon fortune, but murder and betrayal at a family gathering send him fleeing into the American frontier, with only the last words of a wise old woman to arm him against what would come. And when the outbreak of the Civil War comes he finds himself fighting on the opposite side of those he loves the most. In The Wars Of The Shannons we see the conflict, both on the battlefield and the homefront, through the eyes of Patrick and the members of his extended Irish-American family as they struggle to survive the conflict that ripped the new nation apart, and yet, offered a dim beacon of hope. Narrated by Scott Larson. To get the audiobook click on the title link below. (also available on iTunes)


(The books below are in production. Stay tuned for news about their release)

LUCKY IN CYPRUS:
A TRUE STORY ABOUT A BOY,
A TEACHER, AN EARTHQUAKE,
SOME TERRORISTS AND THE CIA

Lucky In Cyprus is a coming-of-age story set in the Middle East during the height of the Cold War. An American teenager – son of a CIA operative – is inspired by grand events and a Greek Cypriot teacher. He witnesses earthquakes and riots and terrorist attacks, but in the end it is his teacher’s gentle lessons that keep him whole.
Narrator: John Hough